Yesterday we started to see these posts about a pitty mix going missing in a pretty bad area of LaSalle St. We were instantly worried.

Michelle, owner, was posting him in groups and people were telling her to reach out to us. We commented on her posts and she messaged us. Communication started.

One of our volunteers, Pam, was out driving around this morning and calling for Bentley. She followed her ‘gut’ again and came upon a man sitting on his porch with a pitty mix, matching Bentley’s description, in his yard and responding to her calls for ‘Bentley’. She approached the man and told him she believed it was Bentley and he wanted a description of his collar, which we did not have yet. The man became defensive immediately and wouldn’t allow her to look into it further, he had taken the collar off. He told her the dog was chasing the mail carrier the day before and he took him in. (He did not call non-emergency or WHS. He just kept the dog.) He got upset and put the dog in the house and drove off Kristin was on her way over. Police were called in the meantime and the CSO left a tag on his door. Michelle’s son, Jacob, arrived and was going to be allowed to claim the dog if it was Bentley.

We went incongnito, except that Kristin – whom he hadn’t seen yet – had on a BP shirt. Hrmph. Now to hide.

Pam had to leave for a few minutes while the second one Kristin went with Jacob to stakeout the house and be ready to call police for the CSO to come back. But with a shirt on, she had to be careful. They went around the block and parked a couple blocks down, but where they could still see the front door.

A minute after parking, the man came back and circled around the block a couple times before going to his house, they called non-emergency. He left his truck door open and ran into the house.  A couple minutes later he came back out and took the police tag off his door, got into his truck, and came their way. Then he parked a block behind them for a few minutes. They were made, or so they thought. They kept looking at the house they were parked in front of to act like they were waiting on someone to come out. He just sat there! They were on the phone with police the whole time, and then he pulled away right after they noticed the lady in the house looking out at them, LOL.

They told police the man left, nothing they could do right now and they’d call back when he came back. Kristin went up to the house she was parked in front of and explained to the sweetest woman, Claire, what they were doing. She allowed them to use her front yard as a stakeout so it looked like they belonged there. And they sat for a while with a foster dog of Kristin’s and the neighborhood kids.

After about 15 minutes, the man came circling back. Kristin had her shirt back towards the house so he hopefully wouldn’t see who she was with. She called dispatch again and told them he was in his house. They would send the CSO out. They wait.

Pam arrives back in the area and drops off her granddaughter, Natalie, by Kristin and then goes and parks in a different area, where he cant see her. They wait.

After a while, Kristin messages Pam and that goes unnoticed for a bit. Suddenly Pam calls Kristin and tells her that the CSO called her and is about 20 minutes out on another call. UGH! They wait.

Not long after that, Natalie says the man let the dog out. Kristin is thinking, “Awesome, the police will get here soon.” Then Jacob says he sees him too! Kristin starts thinking, “wait!” and asks, “In the yard or outside the yard?” Both say outside! Kristin tells Jacob to go get him and he runs and the dog runs right to him! Bentley is caught by his owner!

I cry as I type this story. It’s why we do what we do. And the way we do it. For the best possible and quickest return home for the dog, and the family!

So, Bentley is home safe. One less to worry about! Here’s pics from today’s excursion: 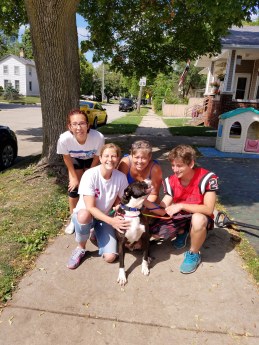 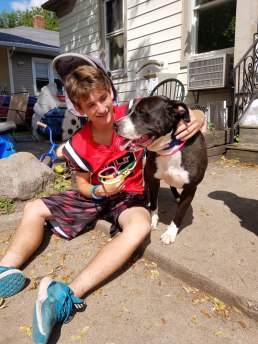